New Delhi. Afghan film director Saharaa Karimi has written a heart-wrenching letter to all the film fraternity and cinema lovers around the world, which has now been shared by Bollywood’s famous film director Anurag Kashyap on his Instagram, appealing to all the people. Have to share it as much as possible. Now this post of Sahara is becoming fiercely viral on social media.

He wrote in his letter, ‘My name is Sahara Karimi, and I am a film director as well as the current Director General of Afghan Film, the only state-owned film company established in 1968. I am writing this with a broken heart and with the deepest hope that you will join me in saving my beautiful country from the Taliban. The Taliban have captured many provinces in the last few weeks. She says, ‘They massacred our people, kidnapped many children, they killed a woman in the name of dress, they tortured and killed one of our favorite comedians, they killed a prehistoric poet. They killed people associated with the government, some of us were publicly hanged, and they displaced millions of families. After fleeing these provinces, the families are in camps in Kabul, where they are in a wretched condition. 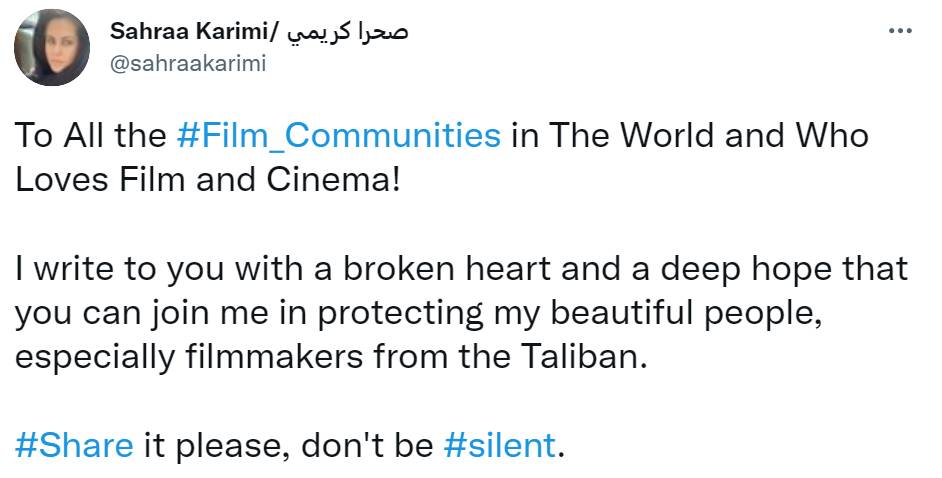 He said, ‘Children are dying in the camps due to robbery and lack of milk. This is a humanitarian crisis, and yet the world is silent. We are used to this silence, but we know it is not fair. We know this decision to leave our people is wrong, we need your voice. What I have worked so hard for as a filmmaker in my country is about to come crashing down. If the Taliban take power, they will ban all art. I and other filmmakers can be next on their hit list. They will violate the rights of women and our expression will be suppressed in silence.

She adds, ‘When the Taliban were in power, the number of girls going to school was zero. Since then, there have been more than 9 million Afghan girls in school. In Herat, the third largest city conquered by the Taliban, its university was 50% female. These are incredible achievements, which the world does not know. In these few weeks, the Taliban have destroyed many schools and 2 million girls have been expelled from school again.

She said, ‘I don’t understand this world. I don’t understand this silence. I will stand up and fight for my country, but I cannot do it alone. I need allies like you. Help this world to pay attention to what is happening to us. Help us by informing the major media of your countries what is happening in Afghanistan. Be our voice outside Afghanistan. If the Taliban capture Kabul, we may not have access to the internet or any other means of communication.

She says, ‘Please support your filmmakers and artists as our voice, share this fact with your media and write about us on your social media. The world does not turn towards us. We need your support and voices on behalf of Afghan women, children, artists and filmmakers. This is the biggest help we need right now. Please help us not to let this world leave Afghans. Please help us before Kabul Taliban comes to power. We only have a few days. Thanks a lot.’

Highlights Girls were dancing in a college in Pakistan and during this time the principal also joined There has been a ruckus in the college after the video of the principal dancing ‘obscene’ with...

Athens: The word ‘love jihad’, which is in political discussion in Uttar Pradesh, Kerala and many other states of India, has now reached the European country of Greece. Recently a Pakistani Muslim boy killed...

Pakistan News: Beware! If you open your tongue against the Pakistani army, then Imran Khan’s staunch supporter arrested

Lahore:Pakistan’s top investigative agency has arrested Army Chief General Qamar Javed Bajwa and a senior doctor for their alleged involvement in running a social media campaign against the Army. The man arrested is a...