The batsman’s slipped leg… lost the wicket by falling upside down, the bowler was also surprised, watch the viral video

New Delhi
Australian batsman Marnus Labuschagne has attracted everyone with his brilliant batting for some time now. At present, the teams of Australia and England (AUS v ENG 5th Test) are playing the 5th Test match in Hobart under the Ashes series. This test is being played with pink ball.

Batting first, Australia scored 303 runs in the first innings. Labushen was dismissed after scoring 44 runs. Just before lunch on the first day, Labuschagne got out in a strange way. England at one time took Australia’s 3 wickets for 12 runs. After this Labuschagne partnered with Travis Head to get the team out of trouble.

Pacer Stuart Broad brought the 23rd over of the Australian innings. Labuschagne wanted to play a shot on Broad’s very first ball but he went too far towards the off-stump, which caused his leg to slip and the ball went straight into the bails. Labuschagne tried to play the ball backwards but he could not understand anything.

This video of Labushen getting out is becoming very viral on social media. From the commentators to the captain Pat Cummins and Steve Smith sitting in the dressing room, they could not stop laughing at the way Labuschagne was dismissed. Fans are also enjoying through different comments.

Australia scored 303 runs in the first innings
Australia started playing 241 for 6 on the second day. The unbeaten return batsman of the first day, Alex Carey, was dismissed after scoring 24 runs, while Starc contributed 3 runs. Nathan Lyon returned unbeaten on 31 and Scott Boland on 10.

Previous Post
The tradition of Uttarakhand Char Dham Yatra was started about 1200 years ago, you also know a little more about this fact
Next Post
Covid peak in India: Corona will be on peak by mid-January, third wave will end in March, IIT professor hints

Ruckus over ICC’s T20 World Cup team selection, Babar captain did not give place to any Indian

DubaiNo Indian cricketer is included in the ‘tournament team’ of the ICC T20 World Cup, while players from Sri Lanka and South Africa are included in Pakistan’s team. Babar Azam Got a place in... 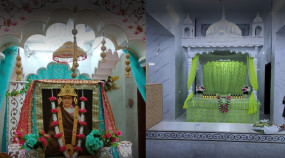 Digital Desk, New Delhi. The Pakistan International Airlines (PIA) has flown 159 Indian Hindu pilgrims from Lahore via Peshawar to Karak, where they will visit a centuries-old temple. This information came from the report...

Massage for immunity: Immunity can be improved through body massage, know the right oil and right time for massage

It has been three years since Corona came among us and this is the third wave in three years that has engulfed the whole world. Every day lakhs of cases of corona are being...