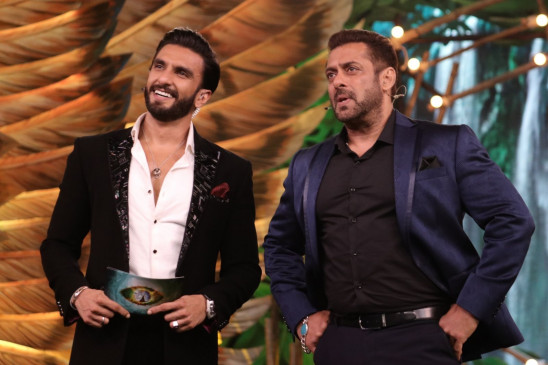 Presenting his own show The Big Picture, Ranveer will use the Bigg Boss 15 platform to promote it. He will be seen asking Salman Khan questions based on the film and then both will reveal the concept of the upcoming show, which will also air on Colors. Salman Khan will introduce the contestants and dance in his unique style on the song Jungle Hai Aadhi Raat Hai with the jungle theme of Bigg Boss 15. Salman will also openly interact with the contenders.

During the premiere, contestants will have to find out which animal they resemble in their forest and to be able to do so, they will have to look in the mirror to see the animal’s reflection inside them. Salman will also give a survival kit to the contestants giving an introduction to the jungle full of Sankat (dangers). The grand premiere of Bigg Boss 15 will air on Saturday night at 9:30 pm on Colors.

Hrithik’s ex-wife Sussanne celebrated birthday with Arslan Goni, said- thank you for everything

Hrithik Roshan’s ex-wife Sussanne Khan celebrated her 43rd birthday on Tuesday. He received a lot of congratulations on his birthday from friends and fans of the industry. Sussanne celebrated her birthday with her loved...

Aryan Khan, ‘in shock’ due to cancellation of bail, sat in the corner of the barrack on hearing the news, kept silence

In the Mumbai cruise drugs case, Shah Rukh Khan’s son Aryan Khan had a crucial day on Wednesday (October 20) when the sessions court’s decision on his bail was to come. This time Shahrukh...

The walls of Lock Up resonated with the fight between Sara Khan and Ali Merchant, both of whom made heinous allegations

lock up ,Lock Up) in the recent episode of the show Sara Khan ,Sara Khan) And Ali Merchant (Ali Merchhant) fights come to a head once again when Sara asks Ali why does he...