Tasks are being done to reach the finale in Lock Up. Where Shivam Sharma became the first finalist. At the same time, he has also been joined by Prince Narula and Munawar Faruqui. This was announced by jailer Karan Kundrra himself. Now the rest of the contestants lost there. Prince and Munavvar point to Shivam and tell Payal Rohatgi that she lost because of him. The actress clashed with Shivam on this matter. After saying lewd things to each other, both of them even made personal comments, due to which the atmosphere was heated.

Actually, after the task was over, Karan Kundrra asked Shivam why he had bad intentions when Anjali was doing the task for Prince. Payal lost her cool on this. And she started questioning Shivam that why did he get defeated by knowing. Apart from this, Payal also tells all the prisoners that she will never play with Shivam as he is not trustworthy. After this Shivam started calling Payal ‘Ehsaan Faramosh’. Payal advised him not to use this word and the fight reached another level. Shivam mocked Payal and said, ‘You gave a hug in the task itself.’ At the same time, Payal was seen refusing to say such a thing to him. But Shivam does not agree. So Payal also started saying lewd things to him.

Lock up: Doctor asking for proof of marriage from Payal Rohatgi for surrogacy, says – not live in, bring certificate
Lock up: Payal Rohatgi can never be a mother, said crying- I tell Sangram Singh to marry someone else
Payal and Shivam take a jibe at each other
Payal advises Shivam to talk well as his computerized fans will be watching. After this, both of them also dragged each other’s performance in the task. Shivam started comparing Payal’s performance with that of Munavvar. On the other hand, Payal said to Shivam, ‘If Munavvar said day to day, he said night to night. Apart from Munavvar, there is also life. If Munavvar is the benchmark, then go and marry him. Shivam also did not sit still. After listening to Payal’s words, he said, ‘You have done it yourself… and you have got divorced.’ On the other hand, Munavvar, Anjali and Prince were all enjoying watching Payal and Shivam fight.

Heropanti 2 and Runway 34 were released in theaters today i.e. on 29th April. Both the films hold a different scale in themselves. The audience of both can be almost same as both are... 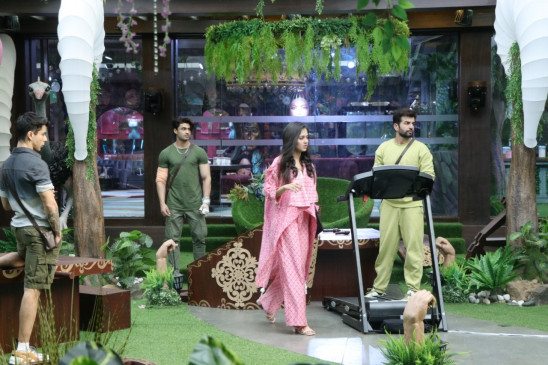 Mumbai, 18 October. In the last episode of Bigg Boss 15, the rivalry and competition among the contestants had become even more fierce and now as Shamita Shetty’s stint as the house captain is...

Aamir Khan’s ‘PK’ will be recorded in history, National Archives gets original negative