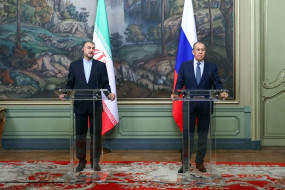 Digital Desk, Moscow. Russian Foreign Minister Sergei Lavrov addressed the situation related to the Joint Comprehensive Plan of Action (JCPOA) in a telephonic conversation with his Iranian counterpart Hossein Amir Abdulahian. The Iranian nuclear deal was discussed in the eighth round of talks on the revival of the JCPOA, which resumed in Vienna on December 27, 2021, Xinhua news agency quoted the ministry as saying. In addition, the two ministers also discussed bilateral relations and regional issues.

Since April last year, Iran and the major parties to the 2015 nuclear deal, Britain, France, Germany, China and Russia, have held seven rounds of talks in Vienna on the revival of the 2015 nuclear deal. The US has been participating in the talks indirectly. The eighth round of talks began in Vienna on 27 December and resumed on 3 January this year. After talks in January, Russian Deputy Foreign Minister Sergei Ryabkov said they had gained momentum. All sides demonstrated readiness to find solutions to other problems.

Biden in action after the killing of American soldiers in Kabul, ordered the destruction of IS

Highlights Global Times has turned red for naming China in General Bipin Rawat accident Brahma Chelani compared this incident of General Rawat to that of Taiwan Army Chief Said that in both the accidents,...