Bollywood’s famous singer Honey Singh misbehaved, the show had to be closed

new Delhi: Famous singers of Bollywood came to show in a club in South Delhi yo Yo Honey Singh was mistreated. Five-six people forcibly entered his show. They started threatening Honey Singh and the artist by going on stage. In the packed show, he showed bottles of beer and scuffled with the cast. Seeing the matter getting serious, Honey Singh had to stop the show midway. All the artists left the stage.

Delhi Crime News: Minor handicapped sleeping outside the house, a young man living in the neighborhood raped
A complaint has been made to the Hauz Khas police station in this matter. The police have registered a case under various sections including assault and threatening to kill. The name of any accused has not been mentioned in the FIR. Police is investigating the case with the help of victim, CCTV cameras and other technical help. The incident took place after midnight of March 26 between 12:25 and 12:45. The police have been told that here in the night, famous Hirdesh Singh was doing a stage show with his artists by the name of Honey Singh. The show was going on in the Scholl Club of South X Part 2.

Agra News: Sirfire lover shot girlfriend in film style, fled from the spot waving arms after the incident
During this, five-six people forcibly climbed the stage. Four-five of these people tried to disrupt the show. It is alleged that these people started pushing and misbehaving with the singer and his fellow artists. The accused started showing beer bottles from the stage itself. There was complete misbehavior in the show. Attempts were also made to stop them. But these people did not listen and threatened to kill them. It is also suspected that some of these accused were also armed.

Gang rape with a girl returning home from duty, thrown in the park in a blood-soaked condition after a night of cruelty
It has been told in the case that it is not clear that the people who carried out such incidents during the running show in the club. Who were these people? What was their intention? But seeing the matter getting serious, first of all singer Honey Singh and other artists thought it better to go from the spot, thinking of the safety of their lives. The police have been told that one of the accused who made the threat is also suspected to have a weapon.

Nora Fatehi enjoying in Dubai after coming to Corona negative, shared video having fun in bikini

model and dancer Nora Fatehi (Nora Fatehi) is very active on social media. She often shares her photos and videos. Nora Fatehi had got corona recently. Now she has recovered and is on holiday... 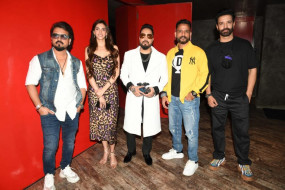 Digital Desk, Mumbai. Famous Bollywood singer and Punjabi popstar Mika Singh has once again brought a gift for his fans in 2022. Mika has brought the video of his new single song Majnu. In...

The wedding celebrations of Ranbir Kapoor and Alia Bhatt are not taking the name of the fans off their heads. This famous couple of B-Town took seven rounds on April 14, but till now...